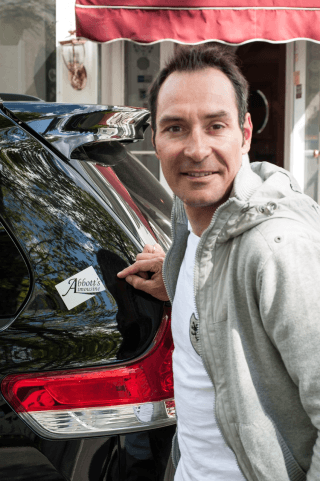 The first annual Berkshire Cycling Classic was a success with attracting about 300 riders. Half were from the Berkshires a good share from NYC and the rest were from 22 different states. Abbott’s Limousine was proud to be a sponsor and take part in acting as the broom vehicle or sag wagon for the 130k leg of the race. Meaning Abbott’s Limo was the vehicle that follows the last rider to make sure they get back safely. Or Abbot’s Limo Bus was there to assist anyone that had an incident or couldn’t make it to the end of the course. Although the Limo Bus is equipped to carry 6 bikes and 14 people, we only had one rider that made it 63 miles and just didn’t want to push anymore. She was super happy that she made it for 63 miles, she did an awesome job!
[pinit] 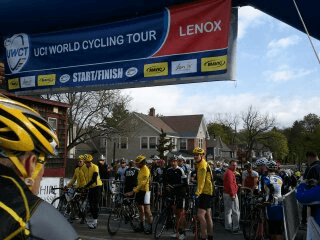 The 130k Race started in Lenox at 8:32am and headed south to begin the challenging Berkshire rolling hills.
Along the route there were 3 rest stops which I gladly pulled the bus into to wait for the riders and stretch my legs. The first stop was at the Mountain View Campground in Otis. They were very cordial and had the best bathrooms right on the grounds (much needed) they were beautiful and super clean. The next rest stop was at the Sheffield Police Station. There were no bathrooms there, but there was however a bike Mechanic complete with a one ton bike stand, complements of Tom from[pinit]

Ordinary cycle of Pittsfield Ma. They supplied some awesome sandwiches and cookies provided by the Berkshire Mountain Bakery. Along the way to the final rest stop along the scenic roads in North Egremont, a gentleman farmer had set up a water stand and greeted anyone with a smile. The last rest stop was in West Stockbridge at the Shaker Mill complex where they had electrolyte drinks and fruit and Bathrooms. Quick recap the race started in Lenox at 8:32am and headed south to begin its 130k route. The last man struggled but made it back to the finish in Lenox, just by the deadline of 3 pm.
[pinit]

This ride was compared to a stage of the Tour De France. In talking to Erik Zabel who had come from Germany to enter this race, the Berkshires is a Pristine place to ride and we both agreed that we have to thank the Event organizer, John Eustice for putting this event together. Abbott’s Limousine felt so passionate about adding a cycling event to the already awesome triathlon the Josh Billing and the road race, Brock Trot.

Being behind the riders in the wagon, I never saw the first rider come in at just over 3 hours, or Erik Zabel hold up as he neared the finish line adding to the class he has displayed for us all on his visit to the Berkshires.
[pinit]

It was an honor to provide the Sag vehicle and NYC transfers for Erik. There were many other volunteers to be thanked; everyone that participated made this a real fun event. Next year we believe the Berkshire Cycle Classic will be a very popular event and grow into an enormous event in the years to come. For our prerace article and more specific click over to our Abbotts Limo confirms Erik Zable to Ride in Berkshire Cycling Classic article.